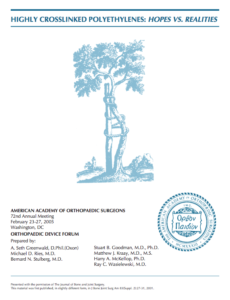 The enduring success of the low-friction arthroplasty first advanced by Sir John Charnley as a solution for severe hip arthritic problems may be appreciated from the fact that in 2003 more than 800,000 hip and knee arthroplasties were performed in the United States. The prevalence of aseptic loosening attributed to ultra-high molecular weight polyethylene (UHMWPE) debris-induced osteolysis has been in the single digits in most contemporary series, with some reports describing prostheses surviving for 20 to 30 years and represents the gold standard against which contemporary material improvements will be measured over time. Beginning in 1997, the FDA approved a series of UHMWPE’s with elevated crosslinking for use in prosthetic joints. Their stated benefit is to dramatically decrease the generation of UHMWPE wear debris, confirmation of which finds support in wear simulator reports for hip and knee components. The commercial adaptation of these new UHMWPE’s has been aggressively marketed particular to acetabular components well in advance of now emerging short-term clinical reports. What follows is a descriptor of the clinical evolution of UHMWPE bearing surfaces: the good, the bad and the hopeful.